The neighbourhood Gràcia is known for its narrow streets and lively, nice squares. As it is located in the upper part of Barcelona, it is not so crowded by tourists and it conserves its authentic atmosphere. Learn more about Gràcia here. Although this district is rather quit, this is not the case from August 15 until August 21, when the Festa Major de Gràcia is celebrated. Every district in Barcelona has its own community celebrations, but Gràcia organises the biggest and most spectacular one. Since almost 2 centuries, it is possible to be submerged in Catalan traditions and life, enjoy live music on the squares, drink and eat typical Catalan dishes as well as international food and assist to the performances of traditions. 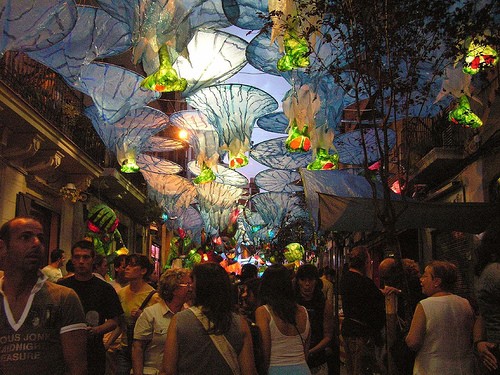 The Festa Major kicks off with a parade of giants, capgrosses and castells on August 15. The streets in the heart of Gràcia are decorated in a very innovative and creative way, with old material. Every street chooses its theme and they compete with each other to win the price of most beautiful street of Gràcia. This brings the people living in the street together and allows visitors to enter a fantasy world. The party week is ended by the correfocs, as devil disguised men running through the streets and sparkling fire everywhere. If you are in Barcelona during this week, it is obligatory to have a walk through the streets, enjoy the festive atmosphere and be amazed by the street decorations. Feel free to share your pictures with us on Facebook, Twitter and Pinterest via the hashtag #aptb4s.